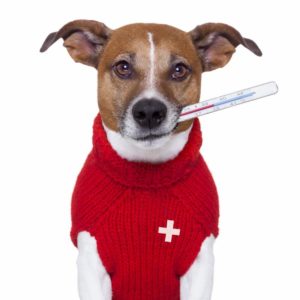 Ok, so the obvious answer is, YES.

I commonly hear ‘I don’t get flu vaccines so why should my dog?” Canine influenza is not like human influenza. The disease causes significant respiratory disease and pneumonia but unlike human influenza has a mortality rate (death rate) of about 8%. Meaning that 8% of the dogs will die no matter what we do.

I mention documented cases because the disease can be difficult to diagnose. What happens is the virus comes in and does its dirty work and then leaves quickly. So, by the time your pet is sick enough to come to the vet, the virus is gone making it difficult to diagnose. In mid-2018 there was a concern, you may have heard it on the news, of influenza being in Las Vegas. As far as I know, that case was not documented and there were no other cases like in a typical outbreak.

Dogs are most contagious during the incubation stage of the disease and the virus can be stable for 12 -24 hours on your clothes and hands. So, even if your dog ‘doesn’t go anywhere’ it is still possible for you to carry things in on your clothes and shoes. Also, the more patients we have vaccinated the less chance we have of having a severe outbreak.

There are now two strains of influenza that we worry about and vaccinate for. The first one, H3N8 was first diagnosed in racing greyhounds in 2004. It is believed that this strain jumped from the horse to the dog. The second strain was first seen in Chicago in 2016. It is believed to have originated from either S. Korea, China, and Thailand or have mutated from the avian influenza virus.

So, for the health of your pet and all pets as a whole, we are recommending and requiring influenza vaccines.

Please ask your doctor and we will be happy to answer any other questions you may have.